Russia advances to the play-offs with a perfect score 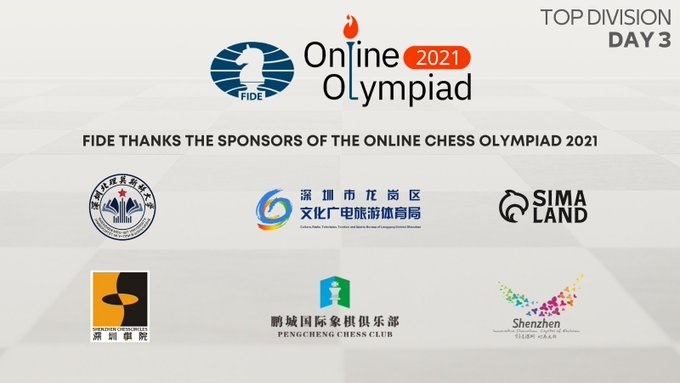 The Top Division of the Online Olympiad finished today after three days of intense top-level chess. A total of 1717 players, playing from 150 countries all over the world, with 888 titled players including 209 Grand Masters and 244 International Masters.

Three weeks after the tournament began, we are closing in on the final stage of the event: the Play-Off by Knock-Out. No more groups, no more comebacks: if you lose you’re out!

This stage of the event will run from Monday, September 13th (Quarter-finals)to Wednesday, September 15th (Final). Each duel will consist of two matches, and in the event of a tie (each team wins one of the two matches, or both matches are drawn) the tie shall be broken with one 3/2 blitz match, followed by Armageddon if need be.

After today’s results the pairings are:

An unfortunate last round loss against Armenia by 2-4 relegated China (14/18) to second place in group A and allowed Kazakhstan to win the group outright with 16/18 points.

A round earlier, Iran, who had lost most of its chances to qualify by tying with Greece, had defeated Kazakhstan, and it looked as if China would prevail; they were leading on tiebreak by quite a substantial margin.

But you can never count out a country with such a chess tradition like Armenia. Although out-rated on all boards by a huge margin, they overcame the ELO difference with strong play: the two main surprise results were WIM Siranush Ghukasyan defeating WGM Qian Huangon board four while WFM Mariam Mkrtchyan defeated WGM Jiner Zhu on board six.

With these results, A1 winner Kazakhstan will face D2 runner-up United States of America and A2 runner-up China will play against D1 winner Poland in the quarterfinals.

IM Bibisara Assaubayeva (Kazakhstan) finished the event with an impressive 7/7 on board six. However, GM Ju Wenjun (China) scored 7.5/8 on board four for a superior final result.

Iran’s GM M.Amin Tabatabaei finished the tournament with an undefeated score of 7.5/9 on board five while his teammate IM Sarasadat Khademalsharieh lost one of her last day games for 7/9.

Logic prevailed this afternoon in group B. India defeated Hungary by 4-2 in the first round of the day and consolidated their lead. A 5-1 win over Moldova, followed by an exciting last-round draw against Slovenia (already as winners of the group) gave the Indian team a 16/18 score and first place in the group.

Hungary will join them in second place with 15/18, three points ahead of Azerbaijan. Although they lost first place to India in the first round of the day they continued to play strong and defeated Sweden and Moldova.

Shenzhen China also played very well and with wins over Egypt, France and Sweden edged out these teams (Slovenia for Sweden) on tiebreak for fourth place.

The quarterfinal pairings will be B1 winner India against C2 runner-up Ukraine and B2 runner-up Hungary against C1 winner Russia.

One of India’s secrets has been sharing the burden of the effort through all the players. Each one of them has participated at least three times – most of them have played five – and only board six WGM Vaishali R. has played a sixth game, scoring an undefeated 4.5/6.

Hungary have also played with all of their players, ranging from two games to six, with strong performances by WIM Bianka Havanecz (reserve second female) with 5/6 and main junior board GM Adam Kozak with5.5/6.

However, the best score of the group has been GM Zhao Xue from Shenzhen China on board three, with an outstanding undefeated 8/9 score. She pulled away from Marie Sebag (France) by winning their individual game.

In the diagram, the position is quite complex. Black has just played 30…Ng5 attacking the rook on e6. Of course, 31.Bxg5 seems fine but Zhao Xue chose another option.

The undisputed winner of group C is the team from Russia. Their final score, 18/18, has left no doubt about the strength of the squad: the icing on the cake was a 6-0 last round win against Latvia, having already secured first place.

They have spread the task fairly between most of the members of the team and have only lost 4 in 54 games (2 of them by GM Alexander Grischuk). An incredible feat!

Even more outstanding is that their six female players have not lost even one game of the 27 they have played!

Ukraine took the second qualifying spot with 15/18, in good measure due to a very close 3.5-2.5 win against Spain in the last round. The Spaniards had just lost all their chances to qualify by losing to Russia by a tight 4-2 (the “best “result by any of Russia’s opponents) but even so they put up a show until the end.

The final standings of the group offer the following quarterfinal pairings: C1 winner Russia against B2 runner-up Hungary and C2 runner-up Ukraine against B1 winner India.

Italy’s Luca Moroni Jr. also turned in a great performance with an undefeated 6/7 score on board two.

Poland and United States of America made true their rating advantage and dominated this group from start to finish. Both of them finished with 16/18 in first and second place, with Poland taking first place on tiebreak. A fair result as they also won their individual match by a clear 4.5-1.5.

Canada, in third place, fought until the end, but couldn’t recover from a seventh round defeat against Peru. More was expected of the Netherlands, with quite a good team (2434 medium rating) but their performance this year was below par.

Poland will play in the quarterfinals against China while USA will take on Kazakhstan in what promises to be two very exciting play-offs.

GM Jan-Krzysztof Duda’s recent victory in the World Cup has brought him a huge amount of confidence. His outstanding result in this event – 8.5 out of 9 – is a homage to his talent and, as they say “Fortune favours the brave”.

In the diagram, Duda is in big trouble, an exchange down and in danger of being mated. However, nothing is finished until you resign, especially in online rapid chess. For example, 51…Rf8 with the idea … Rf7 is +4 and should be a simple win.


But Colombian GM David Arenas, a very strong rapid player, blundered with 51…Rb2?? And had to resign after 52.Qd8+ Kh7 53.Be8! and Black is mated in a few moves. A spectacular turnaround.

(GM Jan-Krzysztof Duda – laptop, confidence and cola for the game)

Also scoring very well for Poland was board four IM Karina Cyfka with 8/9. Finally, GM Awonder Liang finished with 7.5/9 as USA’s top result on board five.

Pairings of the rounds, live games, PGN files and other useful information can be found on the FIDE Online Olympiad website. Please note that all results and standings remain provisional until the fair play panel submit its daily report.