Online Chess Olympiad: USA vs RUSSIA in the final 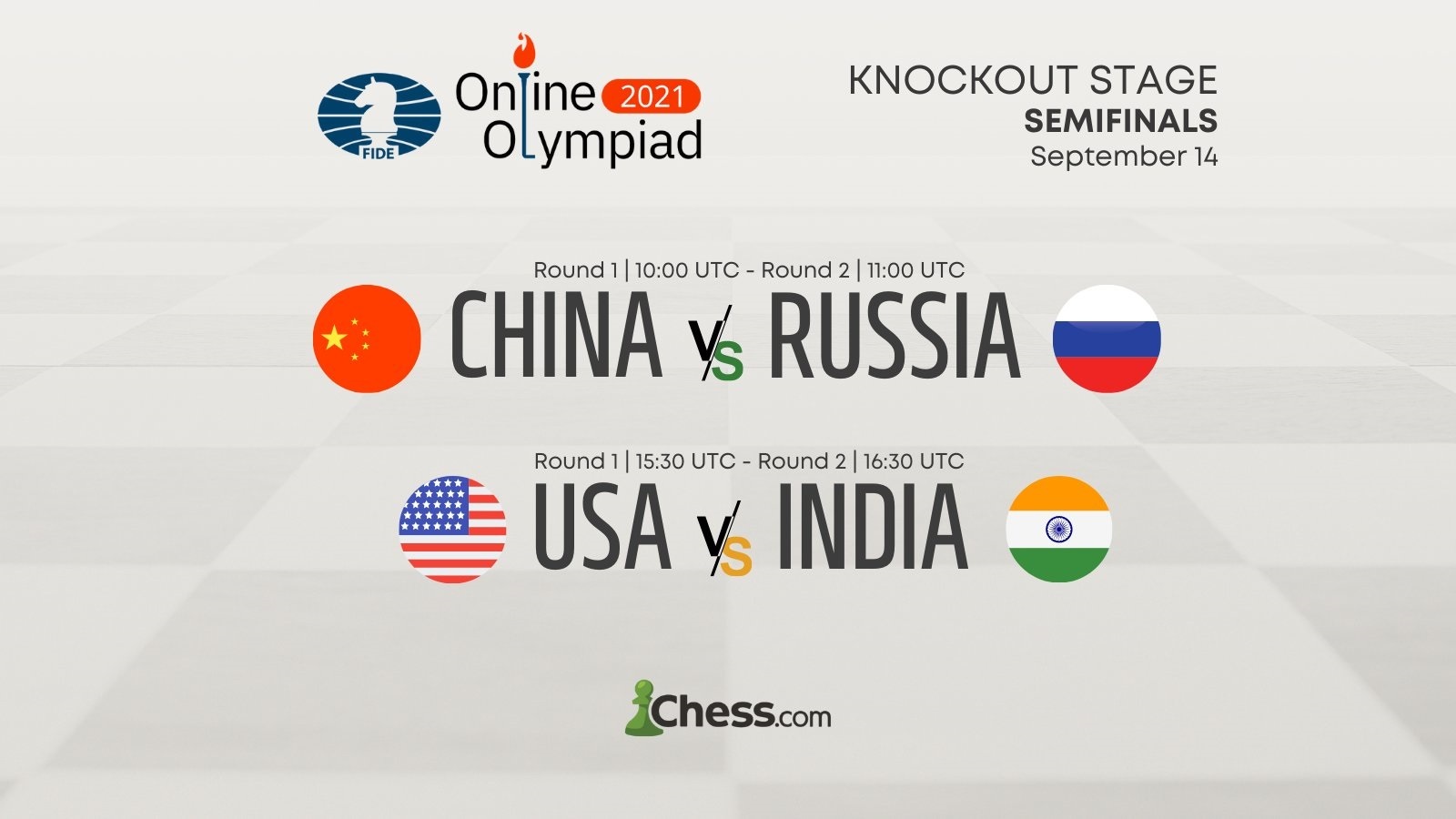 The teams of the United States of America and Russia will battle it out tomorrow (UTC 16.30) for the gold medals in the 2021 edition of the Online Chess Olympiad.

Russia was the first team to advance to the final this afternoon by defeating China in two close six-board matches while USA qualified by defeating last year’s co-winner India in the tiebreaks, after the two regular matches ended in a win apiece.

Both teams arrive in top form after nearly a month of competition, in which teams from 155 countries have played each other in a novel pool-structured system, ending in a knockout playoff.

Before the Olympiad began, Russian President Vladimir Putin sent a greetings letter to all the countries participating in FIDE’s most universally recognized chess event.

Team USA advanced to the final after defeating, not without much difficulty, team India in the tiebreaks. The achievement is outstanding: after being crushed 5-1 in the first match, they were able to regain focus, and win the second match by 4-2, prevailing finally by a clear 4.5-1.5 in the blitz tiebreaks.


In match one, Jeffrey Xiong uncorked an interesting novelty (10...Qa3 instead of 10…Qxc2) against Vishy Anand in a fashionable line of the Caro-Kan. The engines are not impressed but the American was doing very well until he lost his way in the ending.

Meanwhile on board two Pentala Harikrishna, with Black, reached the following position against Dariusz Swiercz.

However, in the second match the Americans made a huge comeback. Xiong took his revenge against Anand in a nice positional game, while Vidit overplayed an equal position with White against Ray Robson and ended up losing.

Harika levelled the score by defeating Paikidze in a strong attacking game but the key game fell to the side of USA when Awonder Liang took advantage of a mistake by Praggnanandhaa in the ending to win a pawn and the point.

It all went down to the blitz tiebreaks. In a risky move, India decided to replace Anand for Adhiban, a very dangerous blitz player, well known for his attacking skills. Nihan Sarin came in for Praggnanandhaa, a move that India had been doing in every match Meanwhile, USA fielded the same team as the second match and their strategy paid off, winning 4.5-1.5.

On board one, Harikrisna went all out against Xiong but fell short to the young American’s sharp counterattack. On board two, Ray Robson converted the advantage of two minor pieces against a rook against Adhiban.

On board three Irina Krush defended solidly during the whole game against Humpy Koneru’s two bishops and took home the point when Koneru missed a tactic and dropped her queen.
On board four, Harika chalked up her third straight point but to no avail.

India did have some connection problems on board six – Vaishali was clearly winning but her time ran out – but the match was lost in any case.

The other finalist of the day was Russia, who defeated China in both of their semi-final matches by 3.5-2.5 and then 4-2.

In the first match, the three evenly-rated top boards ended in draws, but Alexandra Kosteniuk – recently crowned Women’s World Cup Champion – won the first of her two games against Ju Wenjun, who up to that moment had performed spectacularly in the event.

China did miss an opportunity on board two. In the diagram, Yu Yangyi, playing Black, has a queen for a rook and a knight but his opponent does have drawing chances.

The other win for the Russian team came from the U-20 junior board Andrey Episenko who also won both of his games, first against Wang Shixu B (great endgame technique) and then against Xu Zhihang.

Episenko is obviously a huge plus for Russia: although only 19, with his amazing standard rating of 2720 he could easily defend any of the first two boards.

In the second match, China bounced back with a win by Hou Yifan against Aleksandra Goryachkina, in the bout between the world women’s number one and two, but were unable to win the match due to Dubov’s fantastic attacking win against Ding Liren, along with the previously mentioned victories by Kosteniuk and Episenko.
Pairings of the rounds, live games, PGN files and other useful information can be found on the FIDE Online Olympiad website. Please note that all results and standings remain provisional until the fair play panel submit its daily report.

This stage of the event will run from Monday, September 13th (Quarter-finals) to Wednesday, September 15th (Final). Each duel will consist of two matches, and in the event of a tie (each team wins one of the two matches, or both matches are drawn) the tie shall be broken with one 3/2 blitz match, followed by Armageddon if need be.